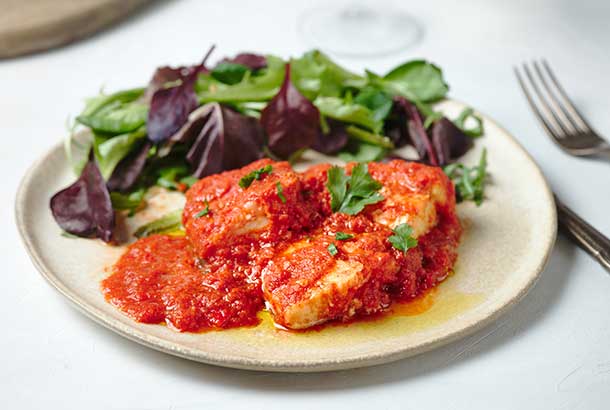 Bacalao a la Riojana is a traditional cod stew dish from La Rioja, a small region located in northern Spain.

La Rioja, also famous for its exquisite wines, is a region with soft mountains covered with vineyards, but with no access to the coast.

Thus, it’s is currently very curious that a cod recipe has become one of the star recipes from this interior region: how did cod get popular in La Rioja?

In the Middle Ages, eating meat was banned on Fridays before Lenten. Thus, people would replace meat with the fish they could get access to.   In the interior regions of the Iberian Peninsula,  cod was one of the few fish that could be consumed, since transportation of fresh fish became unthinkable with the few options to preserve it.  Cod was a cheap fish that endured transportation conditions very well when salted and dried.

Today, it’s still very common to find salted cod in almost all food stores in Spain. For many years and still today, there were even stores exclusively dedicated to the sale of salted, dried or fresh cod, which are known as bacallanerías.

Portugal, the neighboring country of Spain situated on its Atlantic side, shares this passion for cod even with more passion than Spain, since cod is the star ingredient of Portuguese cuisine.

In this recipe, one of the dozens of traditional Spanish recipes with cod, the fish is served with an accompanying sauce made with peppers and tomatoes.  Since fresh cod is so readily available, most of us will probably use fresh instead of dried fish.  One more note, if you make your own roasted peppers, add the juices from the peppers to the sauce.

This sauce gives it its characteristic bright red color. It is one of the most popular cod dishes on the menus of Spanish restaurants.

The Next Session Starts August 9th, 2021