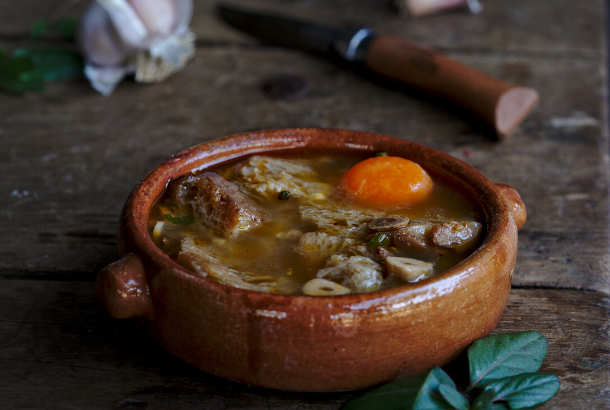 Spanish Garlic soup originates from the Castilian region in the interior of Spain, specifically in the small area of ​​Zamora.

This soup has a simple base and is therefore subject to multiple variants; it is common to see other ingredients in the soup besides the ones detailed in this recipe.

In ancient times, this Castilian soup was a typical lunch for humble people. It was an extremely cheap and very comforting recipe to spread warmth throughout the body in cold rural areas. It was eaten in the middle of the morning to maintain strength for the day, usually with one or two eggs cracked inside, which were cooked from the heat of the soup.

Like most ancient recipes, it served the added function of utilizing leftover bread from the day before.

In certain places in Spain, this soup is one of the typical dishes of Lent, because it doesn’t require meat and its simplicity suits the religious focus. It constitutes one important element of the rituals involved in the processions of Holy Week.

Like all popular dishes, it’s celebrated highly; there are even poems dedicated to the Spanish Garlic Soup. Here’s one by Ventura de la Vega (1807-1865):

I fill it with water: a broken bread

In small fragments I will throw it in later;

With salt and sprinkled paprika,

Of pure shy oil I water it;

I hide them in the spongy dough.

A few points of technique when you make garlic soup.