A few months ago, I came up with the best weight loss goal ever.  It felt like an epiphany when I thought of it, like I had solved the world’s financial problems or came up with a cure for gout (possible exaggeration alert).

Losing so much weight by so and so date seemed to be an elusive goal for me, one of those goals that you put on your resolutions list year after year, decade after decade.  The goal that I came up with a few months ago, in some ways was less specific than the “weigh blank pounds by this date” goal, but somehow it felt like the most powerful weight goal I had ever made.  It had a finality to it which I liked and a promise of success that thrilled me.  It was based on something I heard a weight loss expert say once (and this is definitely paraphrased), “You don’t want to see on your gravestone ‘Here lies a lifetime dieter.  May they reach their goal weight in heaven'”   I don’t want to be known as that guy who is always on a diet.  I want to be done with it.  I want to get on with more important things.  It’s time.  So, here is my goal:  By the end of 2016, I want to never have to think of my weight ever again.  Simple as that.

This means that, in the next 6 months, I will do whatever I need to so the whole weight loss thing is over, kaput, end of story.

With that in mind, I have officially begun the 8 week Mediterranean Weight Loss Program.  My goal for the 8 weeks is to lose 10 pounds.  My year end goal is to lose 20 pounds and to have developed habits which will keep it off for the rest of my life.

Here are the results of my first weigh-in as of Monday (drum roll please): 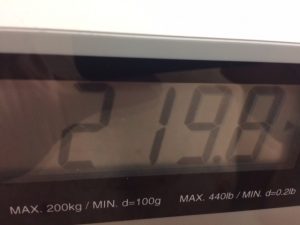 There you have it.  219.8 pounds.  A few years ago, I weighed 256 pounds.  The weight has come off slowly and successfully.  I feel infinitely better than I did back then and I am ready to accomplish my goal.

Do you have a weight loss goal you would like to accomplish in the next 8 weeks?  Share it in the comments below.

May we reach our goals and aspirations, whatever they are!

The Last Supper (day before the diet)
I have lost 40 pounds! (Video)

The Next Session Starts August 9th, 2021