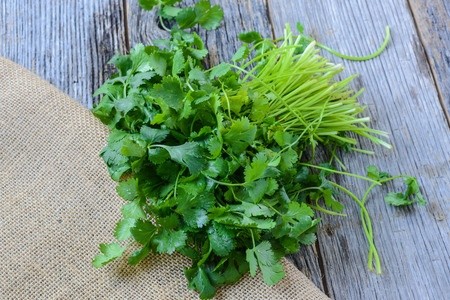 Published on August 26, 2014 | in Weeds and Spice By Christine Kenneally | 0 Comments

Cilantro and Coriander are different parts of the coriandrum sativum plant. The leaves are known as cilantro, and the seeds are coriander. It belongs to the carrot family, called umbelliferae. This plant is native to the Mediterranean region, but now grows in many parts of the world. It is an annual, and grows best in very sunny areas.

Throughout history, this plant has been revered as having a variety of special powers.

The Chinese believed that Coriander seeds would bestow immortality upon the dead; it has been found in many ancient Chinese tombs. Coriander is also believed to be an aphrodisiac-referenced in the Arabian “Thousand and one Nights” it would conjure the power of love and romance when used in sachets. During biblical times, cilantro was used by the Hebrews as the bitter herb in the Passover meal. The Roman soldiers under the reign of Julius Caesar took coriander with them, using it as a meat preservative and to flavor food.

Cilantro, the dark green, feathery shaped leaf of the plant, also called Chinese Parsley, has a slight citrus-y flavor with undertones of sage and ginger. It is a versatile herb, as its flavor complements a variety of different foods, including fruits, vegetables, meat and bean dishes, soups and salsas. It should be used fresh, and raw, as cooking or drying the herb causes it to lose its flavor and health qualities. It is an important part of Mexican, Indian and Asian cuisines.

Coriander, the seeds of the plant, are yellowish-brown in color, and develop a rich aromatic flavor as they are dried. Many people grind the seeds and use the powder in a variety of dishes. It is a main ingredient in curry powders as it has a slightly sweet and peppery flavor. It is also used in northern African cuisines, as an ingredient in harissa sauce.

Both parts of the plant contain a large number of medicinal qualities.

Adding cilantro to your diet will not only bring you delicious fresh flavor, but will also bring many health benefits.

In the summer, when cilantro is fresh, we recommend that you try this delicious Salsa recipe. It also provides a great way to use all the delicious tomatoes that are so plentiful this time of year. Enjoy!

Herbs and Spices: A Guide to Culinary Seasoning, by Waverly Root, 1985

Christine is the Wellness Coordinator for Mediterranean Living and is very happy to be involved in the development and growth of this organization. She has many years of experience in non-profit program management and arts education administration, most recently working at Snow Farm: The New England Craft Program. She has a B.A. in Psychology and Spanish from Siena College. In addition to playing an active role in the vision behind Mediterranean Living and it's many projects, Christine likes to break glass and tile up into tiny pieces and arrange them into patterns, creating fine art and architectural installations. She teaches workshops in the art of mosaics, does public and private commissions and exhibits her work. She is also married to Bill Bradley.
View all posts by Christine Kenneally →