Healing the Planet with a Plant Based Diet

In 2020, Sir David Attenborough, the legendary broadcaster and natural historian, released and starred in “A Life On Our Planet”, a documentary meant to illuminate the catastrophic impacts of the warming planet and offer hope about how we might avoid it. In the documentary, he shares that one of the best ways individuals can help fight climate change is by eating a plant based diet. Currently, almost half of the surface area of Earth is devoted to agriculture.

Attenborough says, “if we all had largely a plant based diet we would need only half the land we use at the moment and because we would then be dedicated to growing plants we could then increase the yield of this land substantially.” 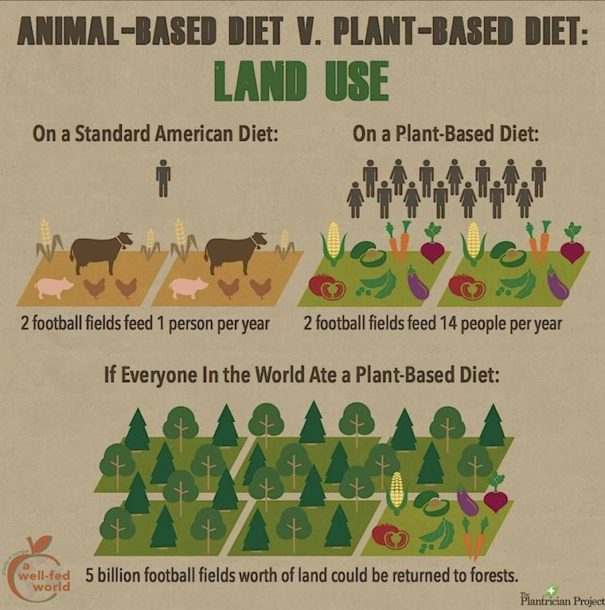 The intersection between diet and planetary health goes way beyond just land use, however. Professor Johan Rockström of Potsdam Institute and Stockholm Resilience Centre and Professor Walter Willet of Harvard University have found that food is the single largest contributor to escalating environmental pressures. In their 2019 paper, “Food in the Anthropocene: the EAT-Lancet Commission on healthy diets from sustainable food systems”, Rockström and Willet show that the impacts of the current food system are as follows:

After identifying the ways in which our current food system harms the planet, Rockström and Willet came up with a goal to achieve environmentally-friendly plant based diets for nearly 10 billion people by 2050. In their paper, they developed a diet called the Planetary Health Diet. Based on diets associated with the lowest rates of heart disease, the Planetary Health Diet is similar to another, more established diet – the traditional Mediterranean Diet. Both are plant-based and neither are “deprivation diets” meaning they have good flavors, are enjoyable and have lots of variety. But how similar are they?

The traditional Mediterranean Diet is based on the diets of people living on the Greek island of Crete in the 1950s when Cretans had some of the lowest rates of heart disease ever recorded. In 1949, dietary data was collected on a group of Cretans by the Rockefeller Foundation that included a record of everything they ate over a period of a week. The top 10 foods they consumed were as follows: 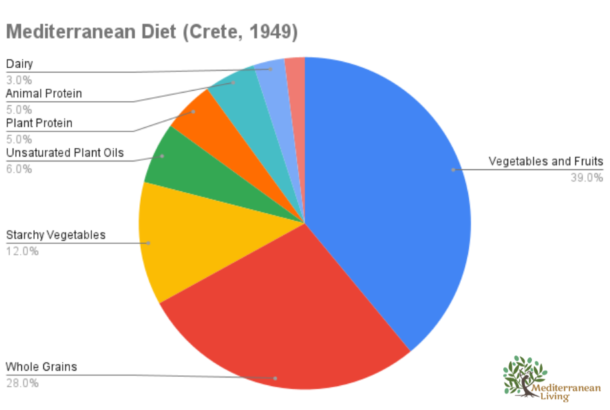 Food breakdown for the Mediterranean Diet based on data collected during the Nutrition Survey, carried out in Crete by the Rockefeller Foundation, “Crete Mission”. Tabulations of food consumption over 1 week in Dramia. Dramia is an area in Crete between the city of Chania and Rethymno.

How does this compare to the Planetary Health Diet? 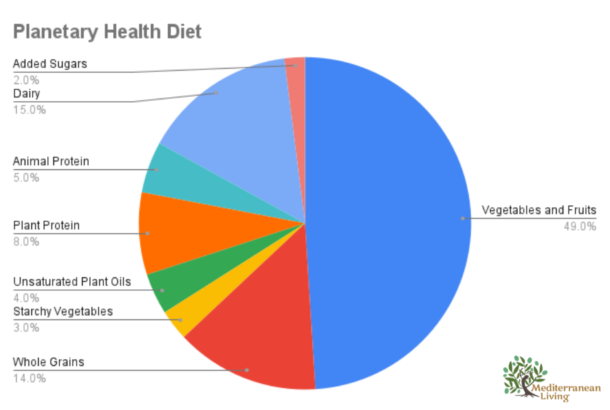 Food breakdown for the Planetary Health Diet using data from “Food in the Anthropocene: the EAT-Lancet Commission on  healthy diets from sustainable food systems” by Johan Rockström and Walter Willet (click here for the article)

As is so often the case, the answers we require for the future can be found by looking backwards. What I find hopeful and inspiring about this intersection between diet and sustainability is that it seems like in order to heal the planet we must simultaneously be healing ourselves with food. We are now living in an age where humanity is the driving force of environmental change on the planet. And so, although our individual choices seem insignificant, our choices are now more impactful than ever. Eating a healthy plant based diet has never been more important and the Mediterranean Diet is a great place to begin.

Want to get started with some plant based recipes?

Click Here for 21 Mediterranean Plant Based Recipes for Beginners