How the People from a Small Mediterranean Island Changed My Life

How the People from a Small Mediterranean Island Changed My Life

Some two and a half years ago, I visited a small Greek island near the west coast of Turkey. From my apartment balcony, I could hear the bleat of goats on the hill below, and could see a brilliant blue sea in the foreground. My husband and two teenage children were many thousands of miles away in Melbourne, Australia. I was on the island of Ikaria, which has been dubbed ‘the island where people forget to die’. It is one of five Blue Zones destinations across the world where residents live long and healthy lives. I had just turned 47 and in that moment, I felt great in my body, in my mind, and in my spirit. 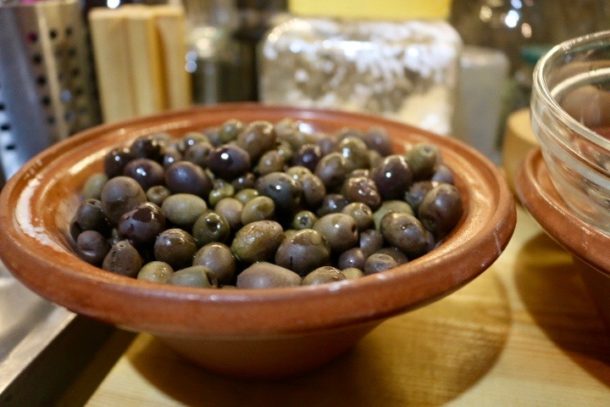 While I am the child of Greek parents, I have spent most of my life living in Melbourne, Australia. My parents immigrated here in the mid 60s. They came from rural villages in southern Greece. There, the Mediterranean diet and lifestyle was not a choice, but a daily reality. Their families had small farm holdings where they raised their own animals and grew their own food. They walked everywhere, and used donkeys for long trips to neighboring villages and towns, often to celebrate weddings and saints’ days. Cars were few and far between. In my Dad’s village, the only telephone was in the cafeneion, a one-room café that sold coffee and a few staples. Though it was at times a hard life, it was also filled with simple daily rituals that were good for villager’s mental, physical, spiritual and social health. 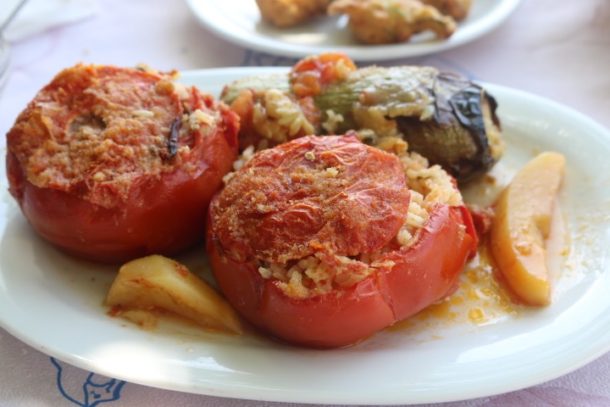 When my parents migrated to Australia, their lives changed drastically. They lived in a big city, worked in factories, and bought a car. They added sliced white bread to their diet, could afford to eat a lot more meat, and rejoiced in the joys of the processed mortadella that was available cheaply at the supermarket. But some things stayed the same – they still grew some of their own food, they continued to cook lots of plant-based traditional food such as fakes (lentil soup) and fasolakia (string bean stew) and they regularly shared food with family and friends. Homemade wine often accompanied meals, and they bought seasonal produce in bulk from food markets to preserve or cook up to share. I remember eating various delicacies such as sweetmeats and livers fried in olive wine and oil. Nothing went to waste when you slaughtered animals on the farm, from their entrails (such as used in magiritsa soup, made traditionally around Easter time), to the fat for making soap. This ethos carried through to life in Australia.

In raising my own family, eating in this way had become more challenging because of our busy lifestyle. While I still loved my Mum’s more traditional Greek food, the kids wouldn’t touch fakes or gigantes (lima beans in rich tomato sauce). They didn’t eat wild greens, and wouldn’t dream of eating any bits of an animal that wasn’t smooth, or that looked like it had been alive at some stage. It wasn’t their fault – they had been bought up on cheese sandwiches for lunch, lots of pasta and other comfort foods for dinner, and shop bought snacks in between – habits we had fallen into because they were easy, quick and pleased little tastebuds. While I tried to include as much plant-based food in our diet as I could, and my husband was a keen food gardener, it was an uphill battle to eat as well as we could have. My husband and I were busy working and trying to stay on top of things, and the diet side of our lives left a little to be desired. We also ate too much, and certainly for me, the kilos had piled on over the years. The Mediterranean diet was something to aspire to, but not a daily practice.

Things came to a head one day when I visited my local doctor. I felt sluggish, constantly tired, and my spirit was flat. She told me that my blood sugars were borderline, and that I could benefit from losing a bit of weight. At the time I was 44, but feeling much older than my years.

Enter one Stamatis Moraitis, about whom I came across an article on the internet one day when I was supposed to be working. Stamatis was a gentleman from Ikaria who immigrated to the US, worked in factories, married and had children, and saved up to buy a 1951 Chevrolet. In his mid-60s, he was diagnosed with terminal cancer. He decided not to undergo aggressive treatment, and worked out that his funeral would be cheaper in Ikaria. He and his wife moved back to their island home. More than three decades later, he was still alive, tending his garden, making 400 gallons of wine each year, and by all accounts living a very fulsome life. 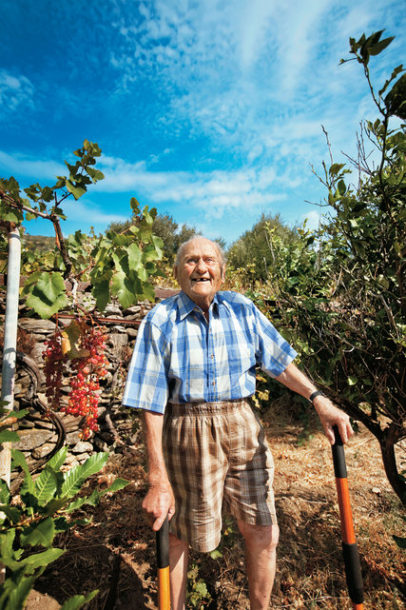 Stamatis was pictured leaning on his shovel, dressed in a blue cotton shirt and brown shorts, glaring into the sun, with his ramshackle garden in the background. The picture reminded me of my own forebears – while their lives were often physically challenging, they seemed to be fully present in the moment. We, on the other hand, were too busy to really cook, we were too busy to sit at the table with our loved ones, we were too busy to enjoy the simple rhythms of the seasons and all that they were able to give us. That picture, and Stamatis’ story (along with the sobering words of the doctor) made me realise it was time for change. And it had to start at home.

I started by compiling a list of things that were important to me. The list was very short: family, health, creativity. I would need to improve my own health, and that of my family. I would concentrate my energies on the people that were important to me. And I would honour my creativity because this gave me energy and made me feel good. The more I read about the Ikarians, the more I realised that I could integrate some of the simple things they did on their island home into my own lifestyle – even if I lived across the world. The changes that ensued were slow and intuitive, sustainable and free. 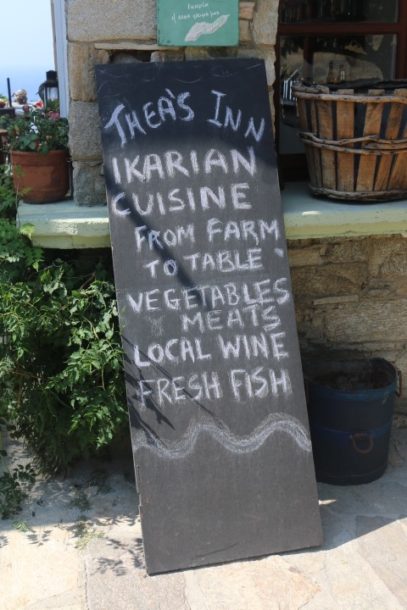 I started with our diet. I remember when I cooked chickpeas for the first time, our kids looked at them as if they were an alien being – but, they ate them. I started introducing more plant foods into every meal, and slowly introduced more of the traditional foods that I had been raised on. I regularly cleaned out the pantry, and filled it with foods that my grandmother would have recognised. Sometimes the kids complained there wasn’t anything to eat in the pantry and fridge – even though both were full. But in the absence of highly processed snacks, they had to eat what was there. I bought seasonal fruits and put them within easy reach in the fridge and in a bowl on the bench. We snacked on nuts and seeds, and I mostly used olive oil in cooking, with lemon juice, oregano and other herbs as seasonings.

Next, I worked on fostering more movement into our lives. I started walking with my daughter, and did daggy dancing with my son to build in exercise without our realising it. I took strolls around the block with my husband to debrief our day. 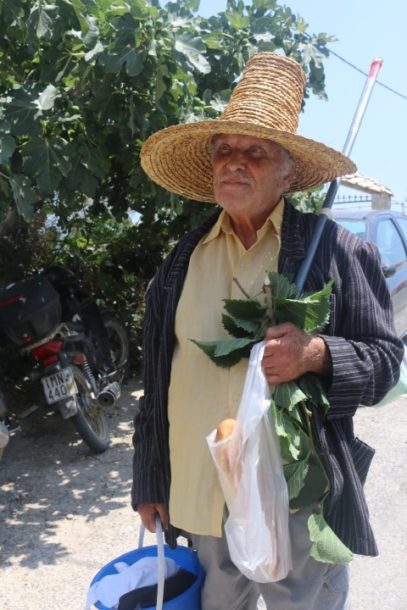 Next came connection and focusing on those who were important to me.  I made sure to prioritise time with my husband through daily rituals like doing the crossword. I began to ring my mother every day and prioritised seeing the people who were closest to me. I got myself a more social job, as I had been feelings pangs of loneliness working as a sole operator of a small business. I would put my tasks aside if the kids wanted to talk or to spend time with me. We cooked together and tried to sit around the table at most meals.

These small and incremental changes led to me losing several kilos, feeling more energised and connected with those important to me, and getting those pesky blood sugars under control. According to a Blue Zones longevity test, it also meant I was likely to live longer. All of this just by making a few small but sustainable changes over several months, that to this day I still maintain.

Some years later, I felt it was time visit Ikaria and pay homage to the man who inspired me in the first place. Stamatis had since passed away. I searched for his grave and lit a candle for him to pay thanks for helping me to re-connect with my roots, and for helping me live a simpler and better way of life.

While on Ikaria, the lessons I had learnt from afar were hammered home. I was invited into homes and shared meals that went from the early afternoon well into the evening. I swam in the sea and collected edible seaweed. I roamed orchards and ate cherries and blackberries straight off the tree. I ate wild greens and drank wine made in vats below the earth. I danced at festivals and connected with strangers. It was a wonderful time to reflect – I was grateful to be alive, grateful to be healthy, and grateful that the island had reminded me that every day is precious. The islanders, through their stories and zest for living fully, reminded me anew that to live simply, fully, and mindfully is what counts. As one islander put it, ‘The answer to a longer life is quite simple: “If you add life to your years, the years will come to you.”’

Order Spiri’s book on Amazon here: My Ikaria: How People from a Small Mediterranean Island Inspired Me to Live a Happier, Healthier and Longer Life.

Spiri Tsintziras is a Melbourne-based author. Her latest book is My Ikaria: How the people from a small Mediterranean island inspired me to live a happier, healthier and longer life. She runs The Tribal Tomato, a blog about food, family and connection. Find her on Facebook at www.facebook.com/thetribaltomato
View all posts by Spiri Tsintziras →