How to eat and make Cretan rusks (Dakos)

How to eat and make Cretan rusks (Dakos)

I don’t like to get embarrassed.  It probably stems from my days as a geeky overweight kid with thick plastic glasses and a tendency towards bright, neon colored clothes bought by my Mother at the Salvation Army.

My fear of embarrassment multiplies by ten when I am traveling in other countries.  I barely tried to speak Spanish during my first visit to Spain for fear of sounding like an idiot.  When I finally dared to ask 3 older women where I could find a restaurant, they broke out in hysterical laughter and walked away declaring me an “Americano”.  Apparently, in Spanish, the “H” is silent.

Sometimes, if I get myself in an embarrassing situation in another country I just try to act as if I meant to do whatever dumb thing I am in the midst of doing.  The first time I walked into a real English pub in London, for example, I knew I wanted a Guinness-like beer, but I didn’t recognize any of the drinks on tap.  Not wanting to seem like an inexperienced American, I just chose one of the brand names and was poured a tall glass of orange juice.  I drank that juice like I meant to order it even as the bartender smirked at me knowing full well what I had done. 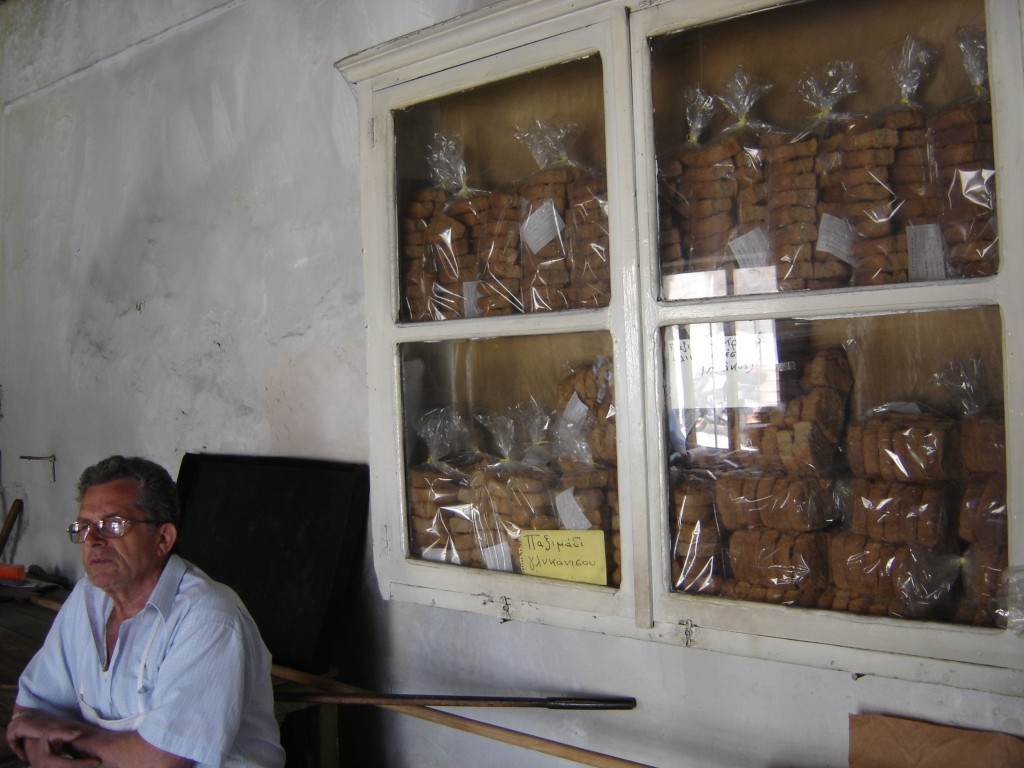 Dakos for sale in a Cretan bakery.

A similar thing happened the first time I ordered Dakos in Crete.  I was in a sparsely populated village nestled on a snow covered mountain in the eastern part of the Island. Barely anyone in the village spoke English and I had traveled here on my own.  The menu was written entirely in Greek so I had to go with the words I knew.  A few weeks before, I had met a guide who brought me to what he called “the most traditional” restaurant in all of Crete.  In the middle of that four hour meal, we heard the sounds of an ever louder megaphone.  I thought it was a politician in a van, but I was told that it was a Dakos salesman letting everyone in the town know that he had Dakos for sale.

My guide told me that Dakos, also know as twice baked bread was a crispy bread (like a big crouton) that was served with a tomato, cheese and olive oil mixture on top.

He didn’t go into much more detail than that which leads me back to ordering it in the little village on the side of a snow capped mountain.

There were only a few words I recognized and these are the foods I ordered:  Tzatziki, Fava, and Dakos.

When the food arrived I immediately dipped my bread into the tzatziki and the fava, both traditional Greek appetizers I had ordered many times.  I then grabbed the Dakos which was covered with tomatoes and took a big bite.  I was lucky I didn’t chip a tooth.  The Dakos was hard as rock and seemingly impossible to bite into.  I tried cutting a piece and found that impossible too.  I was amazed that something so traditional could be seemingly inedible.  I didn’t have to feel too embarrassed in this situation because there were no other diners in the tiny little establishment, but still I decided to privately struggle with my dish and solve the problem of how to eat it.  I poured some olive oil on it which just seemed to soften the surface.  This made it possible to scrape off small pieces of bread while still not being able to penetrate the majority of the Dakos.  After much tribulation, I finally decided to do the only thing I could think of.  I ate all the tomato mixture, wrapped the rest of the Dakos in a napkin and put it in my pants pocket.  Later, as I walked home, I took the Dakos out of the napkin and threw it at an olive tree.

What I later learned was that if you are an impatient American you are never going to be able to eat Dakos.  The trick is to wait while the tomatoes and olive oil mixture soften the hard bread so that it becomes not only edible, but quite delicious.

These days, it’s a little more difficult to embarrass me (even in a foreign country) and I can say that I have mastered eating Cretan Dakos.

Dakos (also known as rusks) were originally created to preserve bread during the non-harvest season.  Dried to a crisp over a period of hours in a low-heat oven, these jaw-breakers could last a year without the need of a single preservative.

The Cretan Dakos recipe in our book  “Foods of Crete: Traditional Recipes from the Healthiest People in the World” saves both time and your teeth by baking the Dakos for a much shorter time at a higher heat.

To make the Dakos:

Slice a loaf of hearty wheat bread into half inch pieces, sprinkle with olive oil, and a little bit of salt.  Bake in a preheated 350 degree oven for 10 – 15 minutes.

Greek olives as a topping

Salt and pepper, to taste

1.  Cover Dakos with tomatoes and then feta.  Drizzle with olive oil and a sprinkling of fresh oregano.  Garnish the top of each Dakos with an olive.

2.  Wait for bread to soften and enjoy!