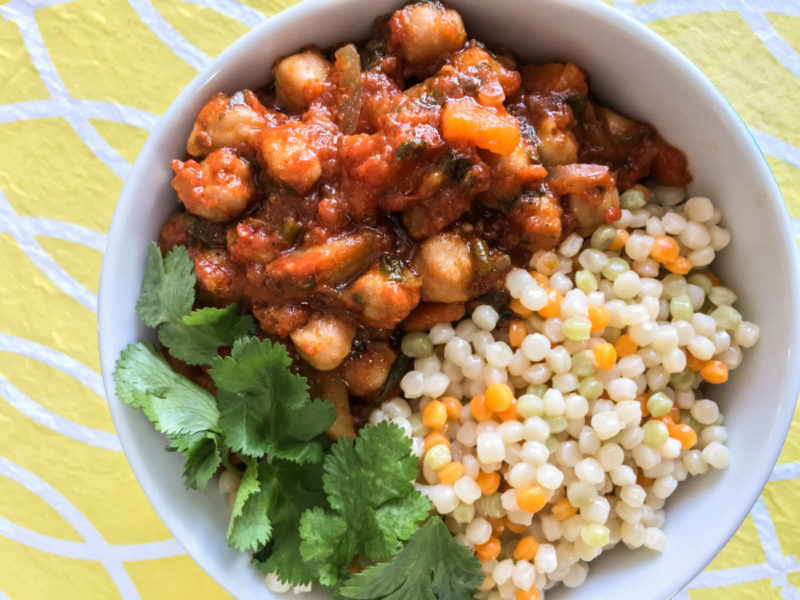 This is my favorite slow cooker recipe to date! Throw this on in the morning and let it cook while you’re at work. This chickpea stew is absolutely loaded with flavor! The spices add layer after layer of flavor, without being overpowering. The onions and garlic just melt away after 6 hours in the slow cooker. A good amount of extra virgin olive oil, a half cup to be exact, really brings all of the flavors together and give a richness that this vegetarian recipe deserves! Not to mention, what is a Mediterranean recipe without an excessive amount of olive oil!

My original idea for this recipe was to create a Greek-style chickpea stew with lots of fresh dill, parsley, and extra virgin olive oil, in a tomato sauce. Then I decided that I want way more layers of flavor than that, so I went the route of spices! I honestly just made up this mixture of spices and I kind of lucked out because not one specific spice stands out when you try this stew. All of the spices meld together beautifully, I think partly because it cooks for so long, and partly because there is a pretty equal amount of each spice, including small amounts of the really pungent ones like coriander and cinnamon.

If you’re looking for more Mediterranean slow cooker recipes, check these out:

Green Beans with Pork and Potatoes in the Slow Cooker (Greece)