This traditional eggplant and pepper salad, Zaalouk, is brought to us by Mahjouba Ezzammoury, an incredible cook from Morocco who is known by her friends and family as Hajiba.  We have changed up the cooking method a bit for the super busy person making it a 30 minute recipe.  Instead of charring the eggplants and peppers in the oven, we make it all in a Dutch oven or covered skillet.  I added Smoked paprika instead of the sweet paprika used in the original recipe to give it the smokey flavor of being charred in the oven.  If you want to try it the traditional way, the following story of Hajiba, making Zaalouk for her son will tell you how.

Zaalouk is one of the favorite dishes of Hajiba’s son Achraf.   Whenever he visits her, she cooks it for him. It can be either served as lunch or dinner, in combination with bread as a full meal or as a side dish combined with something else.

Like every meal Hajiba cooks, she goes to the souk (market) right after breakfast to buy all of the fresh ingridients. For this dish, she returns with eggplants, peppers, tomatoes, garlic and a bunch of cilantro. In her tiny, but well organized kitchen, she then starts to spread out everything she needs to make the Zaalouk. Now it’s time to actually start cooking!

Hajiba starts by putting the eggplants and peppers into the oven and roasts them at 450 degrees until their skin is burned. While waiting for them to be ready she starts chopping up the tomatoes into small cubes and adds them into a pre-heated large skillet with 3 tsps olive oil. Then she adds the minced garlic to the tomatoes and lets it simmer on medium heat for a while.

Because Hajiba is also busy with baking fresh bread, she sometimes forgets her veggies in the oven. While preparing the dough she smells something burned and remembers that she should turn the peppers and eggplants to get burned evenly on all sides.

Now she adds cumin, sweet paprika and salt to the tomatoes and stirs everything around. A very familiar smell spreads out in the apartment and attracts Achrafs attention. He joins his mum in the kitchen and in combination with the smell of fresh bread in the oven he can’t wait until it’s finally ready.

Now the skin is burned and Hajiba takes the veggies out of  the oven to remove their skin. She chops them into small pieces and stirs everything into the skillet. She then adds a little bit more olive oil, chopped cilantro and also more salt if needed. While she lets it cook for 5-10 minutes more, Achraf and her prepare the table with the freshly baked bread, olive oil and some hot spices. Sometimes it‘s eaten hot, but it‘s also very tasty cold. Enjoy! 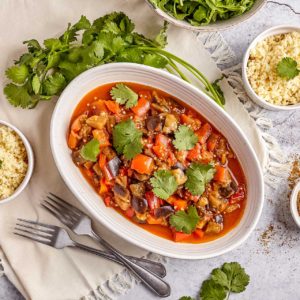