I visited Philadelphia last weekend and spent most of my time either eating or looking for places to eat.  The City of Brotherly Love is full of fancy, one-named restaurants (Amada, Morimoto, Buddakan) which are all well reviewed with full reservation lists or long lines.  We did try one of these; Zahav, which specializes in “refined Israeli cooking” and we found it resoundingly delicious. But, I especially enjoy the mom and pop Mediterranean eateries where you can get lunch or dinner for under $10. 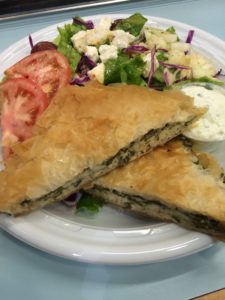 The Reading Terminal Market in downtown Philadelphia is one of the cities’ culinary treasures, a smorgasbord of locally owned food stands and specialty shops that stimulate the tastebuds.  At first sight, it isn’t exactly a healthy eater’s paradise. But, if you look beyond the glazed doughnuts, pork ribs, and ice cream you will find organic veggies, raw milk and cheese, a creperie, and two Mediterranean grills that sit directly across from each other.  Kamals, a Middle Eastern establishment and juice bar specializes in Falafel and Gyros. Olympic Gyro, a Greek grill, touts Gyros and Spanakopita (spinach pie) as two of their best sellers.  I tried Kamals and Olympic and was happy with both, although I much preferred the spinach pie at Olympic Gyro.

Despina, the owner of Olympic grill, makes the spinach pie from scratch with fresh (not frozen) spinach and olive oil instead of butter.  The pie is heated on the grill, so the phyllo stays crispy. She also makes her own baklava, which is a perfect mix of mild crunchiness on the outside and a moist, chewy center.  Immediately before serving the baklava, she drizzles honey on top. This is a nice personal touch, that also maintains the crunchy top and makes me want to come back for more.  If you make it to Reading Terminal, I would highly recommend Despina’s spanakopita platter, which comes with a Greek salad.  I know this might sound crazy to some, but I had this for breakfast with a latte.  This would not be unusual in Greece, but definitely not the normal breakfast in the United States! 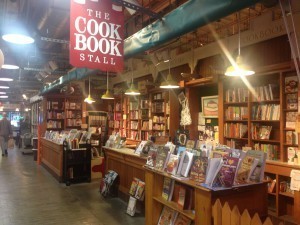 Also, if you are at the Reading Market, check out The Cookbook Stall, a cookbook store with an amazingly eclectic array of books including an excellent Mediterranean section.  I bought “The Lebanese Cookbook” by Hussien Dekmak, a Lebanese chef who is the head chef at the Mia Lounge in London.  The recipes are simple and look tantalizing.  Jill, the owner of the Cookbook Stall, is very knowledgable on cookbooks.  Like me, she has hundreds, if not thousands of cookbooks in her own collection.

Philadelphia is a restaurant haven.  I recommend trying the fancy Mediterranean restaurants such as Zahav (Israeli) or Amada (Spanish Tapas) for the experience, but, for down home Mediterranean cooking that is delicious and inexpensive visit the Reading Terminal Market.  The baklava alone is worth the trip!

Do you want to eat like the
healthiest people in the world?

In the 1960’s, the Greek island of Crete had the highest longevity rates in the world, the men lived to be the same age as the women and researchers could only find one man on the island who had heart disease.

In our cookbook, Foods of Crete: Traditional Recipes from the Healthiest People in the World you will find over 110 delectable recipes by Koula Barydakis, a chef and cooking teacher from the island and a guide to eating the Mediterranean diet by Bill Bradley, Registered Dietician.

Order now and get FREE shipping →