How to Cook a Moroccan Tagine Dish without a Tagine

How to Cook a Moroccan Tagine Dish without a Tagine

Cooking with a Tagine

If you have ever ordered a traditional Moroccan tagine dish in a restaurant, half the fun is when the tagine, a colorful, earthenware pot, arrives at your table.   As the tagine top is removed, a large cloud of steam billows into the air and the unique smells of moroccan cuisine enters the nostrils.  Most tagines start with  meat, chicken, or fish and are slowly cooked with lemons, vegetables, onions and olives and are flavored with some combination of  cumin, ginger, cinnamon, saffron, turmeric, parsley, or cilantro.  Because of the low and slow cooking, the spiced meats melt in your mouth and  the vegetables are flavorful and tender.  A tagine dish is always a favorite Mediterranean diet recipe.

Cooking without a Tagine

When I first began cooking foods from the Mediterranean Diet I was afraid to try a tagine dish because I didn’t actually own a tagine.  That all changed when I recently talked with my friend Hafid Assab, who owns the Mosaic Cafe, a Moroccan restaurant in my hometown of Northampton, MA.  Hafid, who was born in Morocco and has been cooking Moroccan food his whole life, told me that instead of a tagine, I could try using a Dutch oven or slow cooker.  Here is Hafid’s Tagine Kefta recipe using a Dutch Oven. 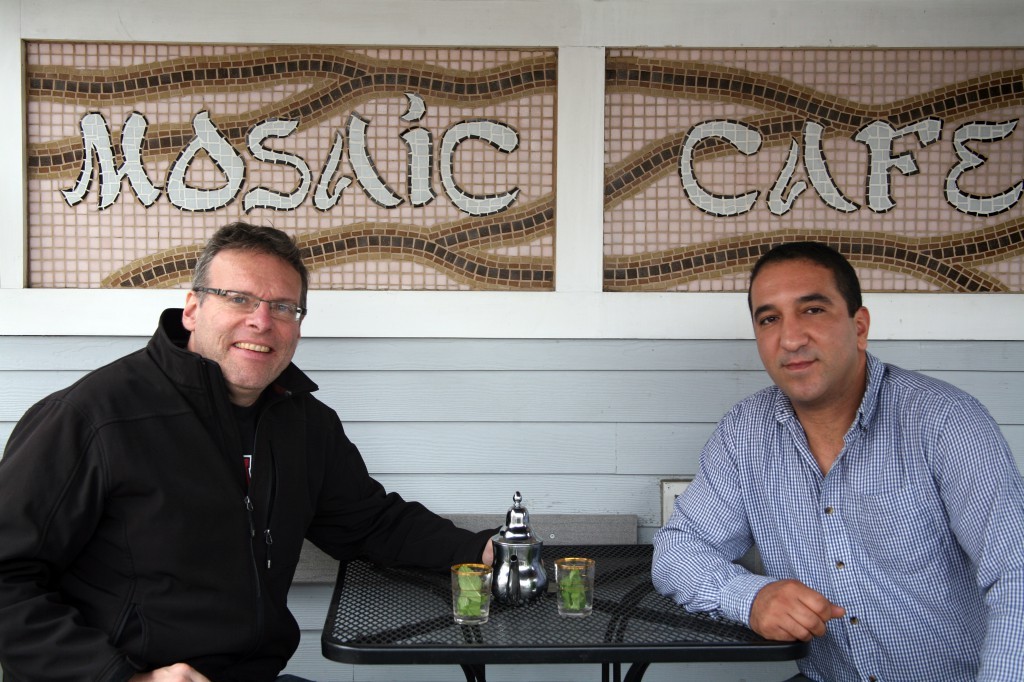 Hafid and myself having tea at his Moroccan restaurant

3 Alternatives to a traditional Moroccan Tagine:

A Dutch Oven is one of my most used cooking pots for Mediterranean cooking.  It is a cast iron or ceramic pot with a tight lid.  It is superior for cooking foods quickly and because it keeps the moisture in, it creates tender, fall off the fork meat and succulent flavors.  Most tagine dishes will cook on the stove or in the oven in an hour or less.  I own both of the Dutch ovens below.  I have a slight preference for the Creuset, but for the price, the Lodge Dutch Oven produces much the same results.  I consider a Dutch Oven a must have for the Mediterranean cook.

The Instant Pot is a multi purpose pressure cooker that can make anything from yogurt to tasty tagine recipes.  It is incredibly versatile and most dishes are done in 15-20 minutes.  It has truly revolutionized cooking and it is perfect for busy people who want to eat healthy and delicious food.  I am always amazed how tender the meat is in under a half hour of cooking.  You can also cook dried, unsoaked beans in under 20 minutes!  We have the 6 quart instant pot which seems to be the right size for most recipes that serve 4-6 people.

Although the Crock Pot has lost some of it’s steam because of the introduction of the Instant Pot it still is a great tool for Mediterranean cooking.  I love that I can prep a soup or stew in under 10 minutes in the morning and come home to the amazing smells in the afternoon.  I still consider it a must have for any Mediterranean cook on the go.

Try our Green Beans with Lean Pork in the Slow Cooker.