Beans are a huge staple in the Mediterranean diet. Many regions of the Mediterranean were very poor for a very long time which affected what they ate. People had to stop eating as much meat because it was expensive, so they switched to other forms of protein. Beans are still a main source of protein in the Mediterranean. In places like Crete, healthy bean recipes are eaten almost daily. Dried beans and legumes are mainly sold in bulk. Canned beans are much less popular. A lot of the recipes featured below use canned beans for the purpose of saving time. In the recipes that use the juice of the beans, make sure not to add too much extra salt, or the end product could turn out overly salty. What I love about healthy bean recipes from the Mediterranean is that they are cooked in a lot of extra virgin olive oil, and flavored with citrus, tomato sauce, herbs, and spices, which make the beans so flavorful. There are also large quantities of greens and vegetables in Mediterranean bean dishes. The extra virgin olive oil acts as a vehicle for all of these beans, greens, and vegetables. Many of these bean recipes are vegan and gluten-free as well which is great because you can make these recipes for people who have food allergies. You can find most of these recipes in the Foods of Crete cookbook. We also have another cookbook available for purchase in the store written by Bill Bradley R.D. called Things to Do with Black Bean Stew, which has over 50 black bean recipes! If you need some delicious anti-inflammatory Cretan extra virgin olive oil to cook these bean dishes with, check out ours in the shop! 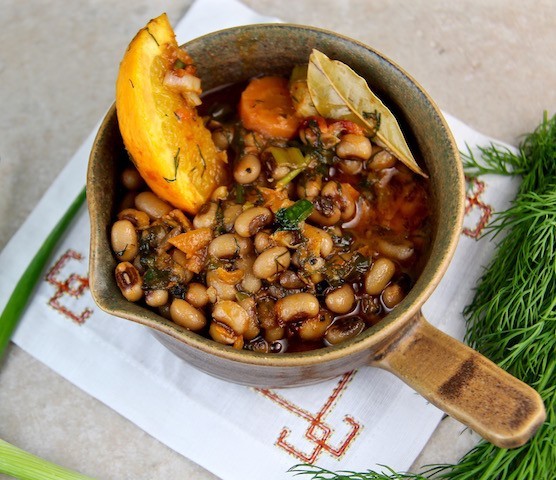 This is one of the best recipes from the Foods of Crete cookbook. This is such a simple recipe that always comes out delicious. The use of lots of fresh herbs, extra virgin olive oil, and orange peel give this dish its signature taste. This is our go-to bean recipe at Mediterranean Living and I know you’re going to love it. Scroll down further to see the Instant Pot version of this recipe, which uses dried black-eyed peas that cook in the Instant Pot in no time. 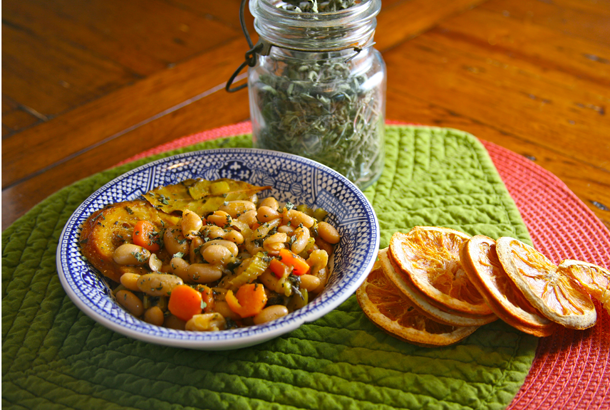 Fasolada is another Greek bean dish flavored with a good amount of extra virgin olive oil, herbs, and citrus. This is extremely simple to make and it’s great for leftovers throughout the week. You should have some good bread to dip in the broth. Serve this with a Greek salad and a glass of red wine and you have a delicious, healthy, and inexpensive Mediterranean meal.

Beans and Greens over Polenta

You’re definitely going to want to use a lot of extra virgin olive oil for this dish because that’s where much of the flavor comes from.  You can use whatever greens are available to you. I recommend swiss chard, collard greens, spinach, or dandelion greens, but any greens will work. In the Mediterranean, they use the greens that are in season. A very recent study just found that eating greens daily slows cognitive decline considerably. It’s well known that dark leafy greens are very healthy for you, but this is more proof to eat them daily.

Crete grows some amazing avocados if you didn’t know. They are included in a lot of different Cretan salads. The Mediterranean diet is a high-fat diet that focuses on healthy fats. This salad is very light tasting but actually has a good amount of fat between the avocado and extra virgin olive oil.

This recipe, by Koula Barydakis, has been on Mediterranean Living since 2013. It’s an absolute go-to recipe for us. Five years have gone by and we got our hands on an Instant Pot Cooker. Now this traditional recipe from the Foods of Crete cookbook, that was already super simple to make, is even simpler! There was definitely some trial and error on getting the black-eyed peas to cook all the way through without being undercooked, or overcooked and mushy. We used fresh, dry black-eyed peas and didn’t soak them overnight.  It was also a challenge to get the right amount of liquid but we’ve got it!

Fasolakia is a very traditional  Greek dish in the “ladera” family. “Ladera” are foods cooked in a lot of olive oil that are served warm or at room temperature. They are usually cheap to make but very filling and delicious. This is one of the best Instant Pot recipes I’ve tried.  Fasolakia is best in the summer when fresh green beans are available. My aunt in Crete likes to add potatoes and zucchini to this dish which makes it more filling. I thought this would be a perfect recipe to adapt for the Instant Pot cooker. This recipe usually takes an hour to cook on the stove. It’s amazing how the Instant Pot can fully cook the potatoes and beans in only 15 minutes!

This is a slow-cooker Mediterranean diet recipe adapted for the Instant Pot. The original version of Instant Pot Green Beans and Pork took at least 6 hours in the slow-cooker, but now you can make this recipe in 30 minutes or less! This is the perfect meal to make when you get home from work because your family will think you spent hours cooking. The pork cooks down to be fork tender. The potatoes, green beans, carrots, and celery cook all the way through but don’t get mushy. It tastes like it’s been cooking all day long.

George studied International Business in Greece in 2015 for three semesters. His family is from the island of Crete, and he lived with them for a whole summer. During that time, he started working for Mediterranean Living and contributing his firsthand experiences of the traditional Cretan diet. He learned fluent Greek along the way, being fully immersed in a traditional Cretan village. He is since graduated with a business degree from Worcester State University. George loves language and traveling, so he completed a TEFL certificate program at the Boston Language Institute in order to teach English abroad and travel the world. He currently works full-time blogging, recipe formulating, and social media marketing for Mediterranean Living. His passions include language, gardening, hiking, skateboarding, and watching sports. He dreams of living in Crete one day, after he travels the world learning as many languages and cultures as possible.
View all posts by George Zikos →